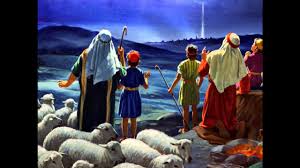 Following the angel's announcement to lowly shepherds that Christ the Savior was born in Bethlehem, Luke 2:13-14 tells us what happens next: "And suddenly there was with the angel a multitude of the heavenly host praising God and saying, 'Glory to God in the highest, and on earth peace among those with whom He is pleased!'” (ESV) Gloria in excelsis Deo! sang that band of angels and the celestial sound of that choir must have caused chills to run down those flock-watcher's spines. But then these shepherds made haste to the stable to see the Baby Jesus for themselves. As the guardians of lambs took it all in, the angel's initial words could not leave them: "For unto you is born this day in the city of David a Savior, who is Christ the Lord." This was not just Israel's long promised Messiah, not just the Savior of the world, it was their Savior and Lord! Theirs! Luke 2:20 records this of their post-manger visit: "And the shepherds returned, glorifying and praising God for all they had heard and seen, as it had been told them." (ESV) We might think the angel's out sang the shepherds, but Jesus didn't come to save angels, He came to save people! Even lowly shepherds! Even us! Do angels sing better than shepherds? Probably. But on that night a shepherd chorus rang forth from Bethlehem's fields and it had to have been music to Heaven's ears! 'Hark! The herald shepherds sing, glory to the newborn King!'