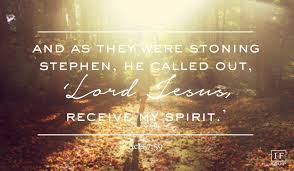 When the Church was still in its infancy, alive and well and growing in Jerusalem, one seemingly terrible event became pivotal in the spread of the Gospel. Stephen, a man of God first appointed with six others to manage the distribution of food to poor widows, was arrested for preaching about Jesus. He gives one of the most incredible sermons ever recorded. But unlike Peter's famous sermon on Pentecost, Stephen's audience wasn't cut to the quick. Filled instead with seething rage, they picked up stones and let them fly. But the Good News about Jesus Christ was not extinguished or drowned out or halted or curtailed by what took place by the bloody murder of this man of God or the ruthless persecution that followed. It only chased it out of Jerusalem, throughout Judea, Samaria, and the uttermost parts of the earth! For two thousand years and counting, God's good and faithful servants, have shown up in the midst of calamities and darkness to love those suffering, shine Christ's light upon them, and lead them to salvation. The Saints of Old have laid down their mantles; will you oh Saints of Now pick them up? Eternal destinies truly are at stake...