Message: “We Live Between Two Advents” from Steven A. Bush

We Live Between Two Advents 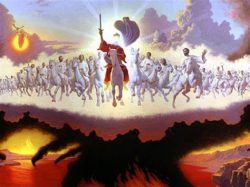 As the season of Advent unfolds, we remember Jesus' first Advent by recounting the stories of His humble birth, announced by angels and revealed to lowly shepherds and wealthy wisemen from the East. These stories are told and retold and celebrated in myriads of ways around the globe. What is less celebrated is Jesus' promised second Advent. And why is that? Because it will be in stark contrast to the first. First time, He was wrapped in swaddling clothes and laid in a manger; next time He'll be robed as a sword-bearing warrior. First time, He came to redeem; next time to He'll come to judge. To persecuted believers in Thessalonica, Paul writes in 2 Thessalonians 1:5-8: "This is evidence of the righteous judgment of God, that you may be considered worthy of the kingdom of God, for which you are also suffering-- since indeed God considers it just to repay with affliction those who afflict you, and to grant relief to you who are afflicted as well as to us, when the Lord Jesus is revealed from heaven with His mighty angels in flaming fire, inflicting vengeance on those who do not know God and on those who do not obey the gospel of our Lord Jesus." (ESV) A lot of songs fill the air as we celebrate Jesus' first coming; not so much the next one. But our reality is we find ourselves living between the two Advents of Christ, grateful for the first, while awaiting the next one with deep abiding love and hopeful anticipation...