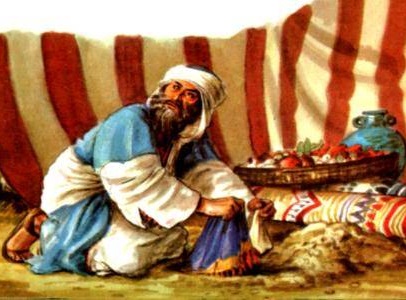 Following Israel's stunning victory at Jericho, Joshua and the Israelites set their sights on the smaller and less formable city of Ai.  Joshua, as he did before Jericho, sends out spies to assess his enemy's strength.  The spies return confident in an easy victory, suggesting to Joshua that Ai could be taken with just 3000 warriors.  Joshua sends out the small force and they are summarily routed.  Joshua and the elders of Israel tear their robes and fall on their faces before God with cries of "Why" with lots of second guessing thrown in for good measure.  God reveals their problem: someone in Israel stole sacred and forbidden plunder from the previous battle, items devoted to the LORD.  God then commissions Joshua to parade the tribes before Him until the culprit is singled out.  A man named Achan, from Joshua's own tribe of Judah, is fingered for the deed.  Achan confesses.  The items are found hidden in his tent.  And Achan is stoned to death along with his family, their bodies burned, and their corpses buried under stones as an infamous memorial to this dark day.  Recalling again the story of Rahab the Harlot, we see vividly the mercy and grace of God lavished upon a pagan bound for judgment juxtaposed here with the fierce wrath of God unleashed upon Achan, a member God's chosen people, bound for the blessings of the Promised Land.  Our God is both loving and severe.  We see this even more vividly as God the Father lovingly gave His only Son, Jesus, to bear our sins on a bloody cross, absorbing the wrath we all deserved.  All this to make us His own.  Our God truly is is both loving and severe.