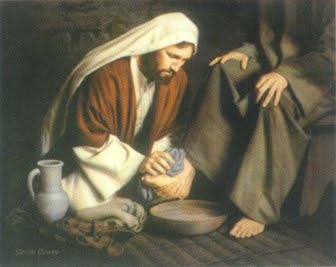 While the supper guest of a Pharisee, an unknown woman entered the house and began to wash the feet of Jesus.  Luke describes her as a sinful woman and the Pharisee is none too pleased with the intrusion.  She brought no basin of water, just her tears--tears of deep gratitude for having been forgiven by her Lord.  Jesus, discerning the Pharisee's self righteous condescension, confronts him with a parable about forgiveness.  Perhaps they skipped dessert.  Later on, at the Last Supper, Jesus Himself fills a basin with water, wraps a towel around His waste, and washes the feet of His disciples.  It's hard to fathom having God the Son, the co-Creator of the universe, stooping down and washing the feet of those who in a matter of hours would betray, deny, and flee His side in cowardice.  But He did just that.  And then He said this: "Now that I, your Lord and Teacher, have washed your feet, you also should wash one another’s feet. I have set you an example that you should do as I have done for you. Very truly I tell you, no servant is greater than his master, nor is a messenger greater than the one who sent him. Now that you know these things, you will be blessed if you do them."