The Sacrifice That Truly Matters

The Sacrifice That Truly Matters 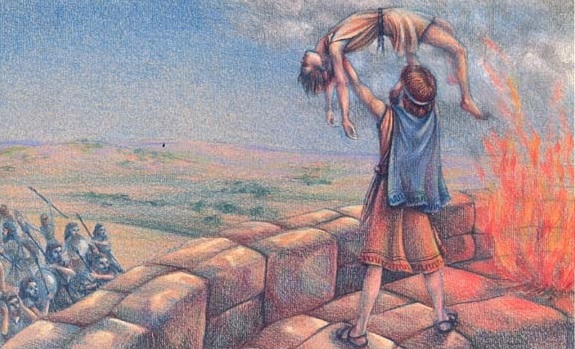 King Jehoshaphat of Judah was asked by King Jehoram of Israel to go to war against King Mesha of Moab. Jehoshaphat agreed and brought the King of Edom and his army for good measure. Well into the march towards Moab, the three kings realize their water supply had run out. Facing certain disaster, Jehoshaphat suggests they call upon the Lord. The prophet Elisha is summoned. There's no love lost between Elisha and Jehoram but Elisha respects Jehoshaphat who reveres God. Elisha prophesies favorably, which includes water flowing in and Moab going down. As water pools in the valley where the three armies are camped, Moab's army from a distance sees pools of red which they surmise to be blood. Suspecting the three armies had slaughtered one another, Moab attacks and they're totally routed. King Mesha, in a desperate act, sacrifices his eldest son to Chemosh, the god of Moab. What is more detestable than an evil king burning his son alive to demons?! But there would come a Day when the Father of all Creation, would sacrifice His only Son, to bring about our deliverance from sin and death. This sacrifice is the one that truly matters. Romans 3:25 declares: "For God presented Jesus as the sacrifice for sin. People are made right with God when they believe that Jesus sacrificed His life, shedding His blood." (NLT) Glory be to God!