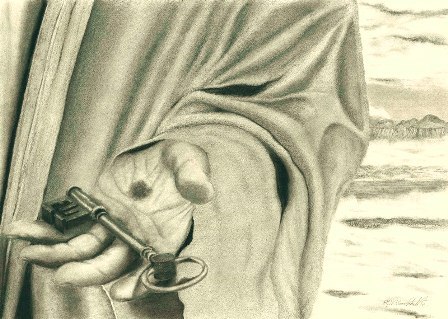 We know from the Scriptures, that before His birth in a lowly manger in Bethlehem, Jesus, God the Son, dwelt in preeminent glory and supremacy. As a man we know He grew up as a carpenter in Nazareth until He was about 30 years old. He then chose 12 disciples, taught in parables, performed countless miracles, and was despised by Jewish leaders who conspired to have Him killed. He was indeed crucified for our sins, dead and buried. On the third day, He arose from the dead. Jesus ascended into heaven and now rules at the right hand of God the Father. John, Jesus’ beloved disciple, encounters Jesus in a fearfully awesome vision where great and terrible revelations are disclosed, among which we are assured, Jesus--the First and the Last--holds the keys of Death and Hades, this very One who inscribes the names of His own into the Lamb’s Book of Life.