Message: “Repetition Builds a Godly Disposition” from Steven A. Bush 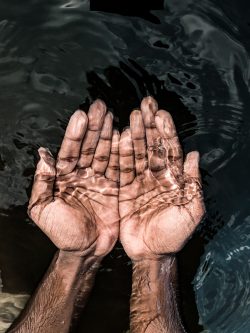 Hear the often quoted words of 1 Corinthians 15:3-4a: "For what I received I passed on to you as of first importance: that Christ died for our sins according to the Scriptures, that He was buried, that He was raised on the third day according to the Scriptures..." (NIV) But listen closely: It's one thing to say and believe Christ died, was buried, and rose again according to the Scriptures; it's quite another thing to say from your heart of hearts, He died for MY sins. 2 Corinthians 5:21 is also much declared: "God made Him who had no sin to be sin for us, so that in Him we might become the righteousness of God." (NIV) Can we hear these words too much? Perish the thought! Of course Jesus warned about praying prayers of vain repetition. i.e. superstitious recitation. And He shared this at the Sermon on the Mount just as He was introducing the oft recited Lord's Prayer. But repetition isn't all that bad when we extract the vain part. How about, meaningful, profitable, fruitful repetition! Yes, that works! Like Paul wrote to the church in Philippi, "To keep writing to you [over and over] of the same things is not irksome to me, and it is [a precaution] for your safety." (Phil. 3:1b AMPC) So some things bear repeating, even over and over again--like the Good News of Jesus Christ!