Lend Him Your Ear

Lend Him Your Ear 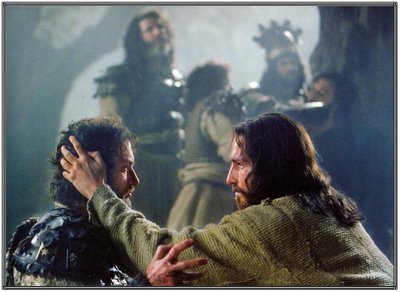 During Jesus' arrest, as Judas audaciously betrayed the Messiah with a kiss, Peter pulled out a short sword and cut off the ear of the high priest's servant.  John tells us the servant's name was Malchus.  Whether Peter's aim was bad or Malchus' dodge was better, we don't know, but Peter was likely aiming for a death blow when fortunately all he got was an ear.  Jesus ordered Peter to put away the sword even while He reached out and healed the severed ear.  Only Dr. Luke records this amazing healing.  Jesus certainly proved that loving one's enemy was not mere platitude.  This would be Jesus' final miracle before the cross and that was now just a few hours away.  Whatever became of Malchus after his encounter will remain a mystery this side of heaven.  Did he ever run into Peter again?  Did Peter ever apologize?  Did Malchus become a believer as some scholars suspect?  It behooves us to ponder what the impact was on Malchus just as we have to wonder the same about every single person who encountered Jesus' miraculous power.  But the greatest miracle is regeneration--when Jesus' power and love penetrate to the core of a person's heart to make them alive and make them His own.  John W. Peterson's hymn lyrics resound with truth: "It took a miracle to put the stars in place, it took a miracle to hang the world in space; but when He saved my soul, cleansed and made me whole, it took a miracle of love and grace!"