Message: “Killing Our Redeemer!” from Steven A. Bush 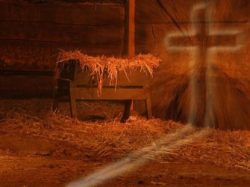 We might ask who put Jesus, born in a humble manger, on the cross? Was it the Jews? Was it the Romans? Was it Satan and his demons? Or was it sinners like us, around the globe and down through the ages? Certainly it was a collaborative effort, a collection of evil deviants--thieves, murderers, adulterers, pagans, idolators, and us who bear the blame. But WHO else was involved? In a prayer following arrest and detainment, we find a portion of the early believers' prayer in Acts 4:27-28: “For in this city there actually met and plotted together against Your holy Child and Servant Jesus, Whom You consecrated by anointing, both Herod and Pontius Pilate with the Gentiles and peoples of Israel, to carry out all that Your hand and Your will and purpose had predestined (predetermined) should occur." (AMPC) It was God Himself Who ultimately laid His Son upon the altar we know as the cross! So as Christmas unfolds, don't look at a manger scene without seeing the crucifixion scene and the empty tomb scene! Because that is why Jesus came! That is why He was sent! Before time began, the cross was Christ's foreordained Father-Son mission and the empty tomb tells us He accomplished it perfectly! Let, therefore men and angels sing yet some more: "Gloria in excelsis Deo!"