Genuine Faith the Color of Scarlet

Genuine Faith the Color of Scarlet 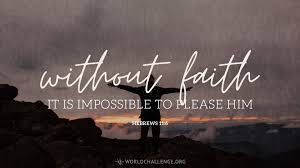 Hebrews 11:1-3 says: "Now faith is the assurance of things hoped for, the conviction of things not seen. For by it the people of old received their commendation. By faith we understand that the universe was created by the word of God, so that what is seen was not made out of things that are visible." (ESV) Hebrews 11:6 adds: "And without faith it is impossible to please Him, for whoever would draw near to God must believe that He exists and that He rewards those who seek Him." (ESV) Hebrews 11 is often called The Hall of Faith. It lists many saints of old who had faith in Almighty God. Their faith had substance. It was genuine to the core. Their faith far eclipsed mere mental assent; it was real and they not only had it, they lived it! Faith in their hearts prompted their hands and feet to action and their mouths to declaration. Their faith birthed a resolve that's made their respective stories renowned. Some of them were blessed with miracles. Others martyrdom. The story of Rahab the prostitute is a Hall of Faith classic (see Joshua 2). Rahab's wild story is more than hiding Israelite spies, her faith leads us straight to Jesus Christ our Lord...