Message: “Extolling the King Who Reigns Forever” from Steven A. Bush

Extolling the King Who Reigns Forever 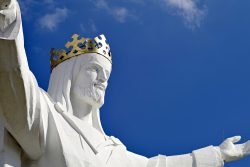 Psalm 145:1-3 says: "I will extol You, my God and King, and bless Your name forever and ever. Every day I will bless You and praise Your name forever and ever. Great is the LORD, and greatly to be praised, and His greatness is unsearchable." (ESV) Not only are these profound words for us in beginning any new year, they're just as appropriate for beginning any new day! God refers to David, who authored this Psalm, as a man after His own heart and it's no wonder after reading this Psalm. God of course promised David that Another King, One from his lineage, would sit upon the throne of the very Kingdom this Psalm so wonderfully extols. When the NT describes Jesus the Messiah as the descendent of David and risen from the dead, it's in essence saying Jesus was both Man and God, or as the Creeds declare--fully God and fully Man. In 2 Timothy 2:8 Paul writes his faithful son in the faith: "Constantly keep in mind Jesus Christ (the Messiah) [as] risen from the dead, [as the prophesied King] descended from David, according to the good news (the Gospel) that I preach." (AMPC) David prophesied about this future King but we have the privilege of knowing this King personally, this King who came indeed, who died for our sins, rose from the dead, and now sits upon a throne from which He'll never be removed! Jesus is the highly extolled King of this highly extolled Kingdom! Let us therefore bless His name forever and ever!