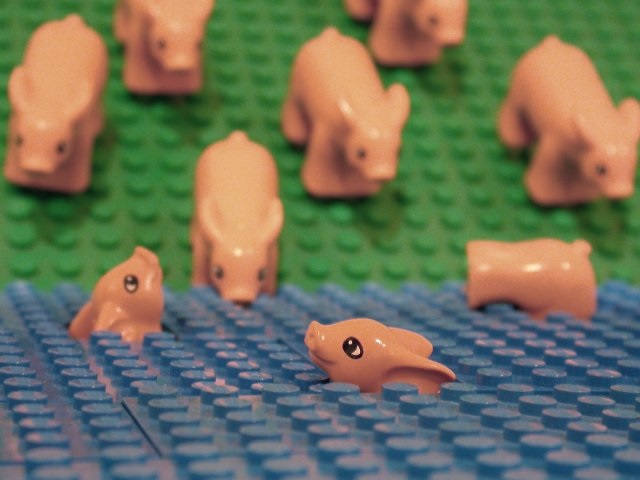 Luke, along with Mark and Matthew, all give accounts of Jesus delivering a man seized by demons in a Gentile region across the Sea of Galilee.  The demonized man ran naked among the tombs where he lived, cried through the night, cut himself with stones, and consistently broke loose when locked in shackles.  When Jesus encountered the man, the demons within him spoke and recognized who He truly was.  They said: "What do you want with me, Jesus, Son of the Most High God?"  As Jesus casts them out, He gives them permission to inhabit a herd of pigs, causing some 2,000 of them to rush down a hill into the lake where they drown.  Terrified swineherds flee and spread the news.  People then come and find the once deranged man, clothed, calm, and sitting at the feet of Jesus.  Frightened all the more, they beg Jesus and His disciples to leave.  Talk about misplaced fear and a missed opportunity!  Jesus leaves but not before charging the man to spread the news as to what God had done for him (and by extension what He can do for others).  The delivered man tells the story of Jesus and becomes, in a manner, the first missionary to the Gentiles.  The plight of the pigs is perhaps a prophetic drama foretelling the day when Satan and his minions will be cast into the lake of fire.  Meanwhile the spiritual realms are pitched in battle but in terms of the outcome, there is no doubt--Jesus wins and so do we...