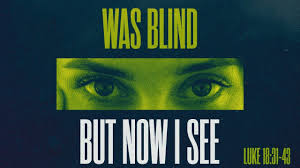 On His trek towards Jerusalem to die for our sins, Jesus passed through Jericho. There he encountered a poor blind beggar named Bartimaeus and a wealthy tax collector named Zacchaeus. Despite both men being societal outcasts, their stations in life could not have been more diverse. Those who were blind or suffered from other disabilities and maladies could only hope for a good place beside the road to beg for a few coins by those passing by. Tax collectors, who were Jewish, ultimately were in the employ of the Roman government and were considered traitors for being notoriously dishonest and for making life harder for those already sorely oppressed. Bartimaeus meets Jesus first. Despite being blind, he recognizes Jesus as the Messiah and cries out for mercy. Jesus displays His mercy by restoring the blind man's sight. Zacchaeus, being small in stature, wanted to lay his eyes on Jesus who was passing through town. To do so he famously ran ahead and climbed a sycamore tree, and when Jesus came by, He called the tax collector down and welcomed him with salvation. Both men had this in common: they both desperately wanted to see Jesus. And because they did, their lives were never the same. May that be the testimony of us all...