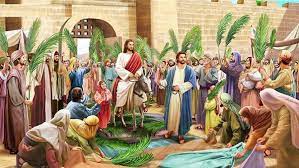 Jesus' triumphal entry into Jerusalem, the Sunday before Friday's crucifixion, is documented in all four Gospels. Jesus rode into the city to waving palm branches and shouts of Hosanna! People with Messianic hopes were convinced He would overthrow the Roman occupiers. Jewish leaders were convinced Jesus was not the promised Messiah. But our Lord's plans exceeded all of mankind's expectations. And as for God's providential schedule, Jesus was not arriving in Jerusalem at a bad time--not too early, not too late--but right on time. Galatians 4:4-6 affirms: "But when the right time came, God sent His Son, born of a woman, subject to the law. God sent Him to buy freedom for us who were slaves to the law, so that He could adopt us as His very own children. And because we are His children, God has sent the Spirit of His Son into our hearts, prompting us to call out, 'Abba, Father.'” (NLT) Romans 5:5 echoes loud and clear: "When we were utterly helpless, Christ came at just the right time and died for us sinners." (NLT) Therefore, it might be a good idea to keep some palm branches handy because the King of kings and Lord of lords has plans to return some Day. Because He said so, He most certainly will. And He'll arrive right on time...