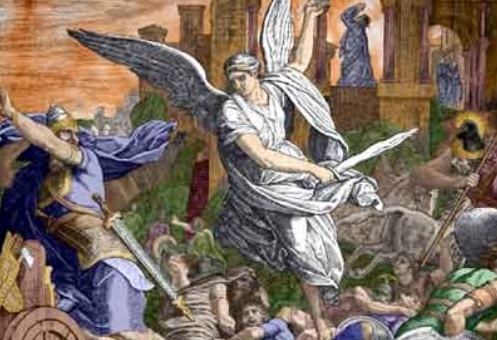 2 Chronicles 20:14-15 is the Word of the Lord to King Jehoshaphat and all of Judah when three invading armies were approaching: "And the Spirit of the LORD came upon Jahaziel the son of Zechariah, son of Benaiah, son of Jeiel, son of Mattaniah, a Levite of the sons of Asaph, in the midst of the assembly. And he said, “Listen, all Judah and inhabitants of Jerusalem and King Jehoshaphat: Thus says the LORD to you, ‘Do not be afraid and do not be dismayed at this great horde, for the battle is not yours but God's." (ESV) This would not be the first or the last time that God intervened miraculously to deliver His people from impending doom. As a church, or as individual believers, we may indeed find ourselves facing an overwhelming crisis with multiple challenges all at once. Finding ourselves in a predicament where only God can deliver is more probable than unlikely. But a greater victory than Jehoshaphat's would come 9 centuries later when the doom we faced was eternal. Jesus' victory over sin and death, won for us on His bloody cross, affirmed by His empty tomb, was the victory of all victories! And it was most certainly a victory unachievable without His omni-intervention. 1 Corinthians 15:57 is our only real response: "But thank God! He gives us victory over sin and death through our Lord Jesus Christ." (NLT)