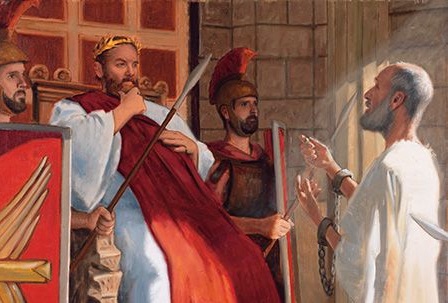 While the Apostle Paul was held captive in Caesarea, he was brought before King Agrippa II to testify. Paul shared his conversion account with the king, including the words Jesus spoke during their encounter. Agrippa was an authority on Jewish customs and religious practice. Paul was not only a former Pharisee but the one once charged to wreak havoc on Christians. And now he's one them! Paul could masterfully unpack the OT Messianic prophecies fulfilled by Christ and yet his transformed life was even more persuasive evidence. But Acts 26:27-30 reveals the sobering conclusion as Paul says to the king: '"King Agrippa, do you believe the prophets? I know that you believe.' And Agrippa said to Paul, 'In a short time would you persuade me to be a Christian?' And Paul said, 'Whether short or long, I would to God that not only you but also all who hear me this day might become such as I am--except for these chains.' Then the king rose, and the governor and Bernice and those who were sitting with them." (ESV) Agrippa was ushered by Paul right up to the fork in the road where one path runs wide and away from God and the other, a narrow path, runs straight to God's heart. But instead of letting his eyes be opened, Agrippa blinked. Jesus said, "I am the door," and Paul walked Agrippa to that Door, put his hand on the knob, but he would not turn it and cross the threshold. Please don't let that be you!